How can I set up the Web Terminal so that volunteers can trade positions?

To allow your volunteers to trade positions using the Web Terminal, follow these steps: 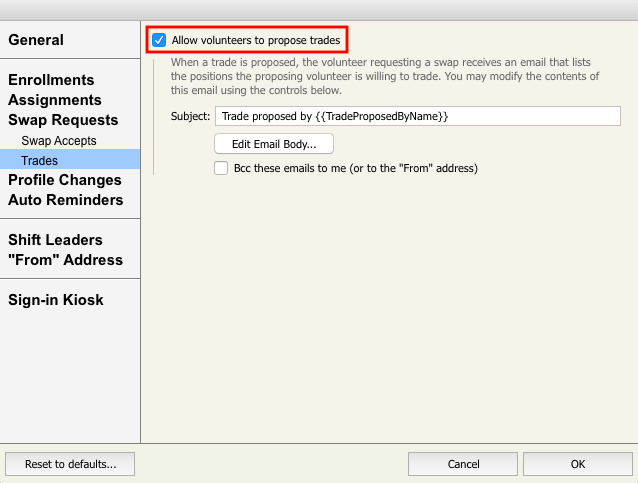 In step 4, you can click on the button that says "Edit Email Body..." to view the email that gets generated when a trade is proposed. We recommend you do not remove anything from the email. If you'd like to include the requesting volunteers' email address in the the email, you can go to the menu that says "SpecialTokensForThisEmail" and add the token {{TradeProposedByEmail}}. This helps volunteers communicate back and forth if there is a conflict. 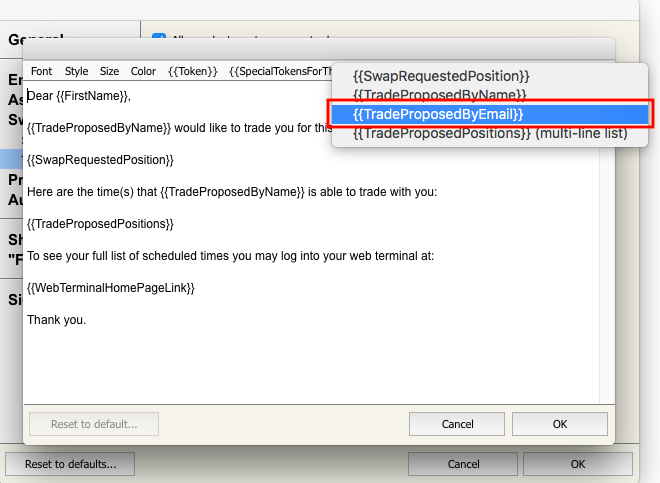 Once you have allowed volunteers to propose trades, when a volunteer clicks on the link to "(volunteer now)" for a swap requested position, they will be given two choices: Fill in the position without a trade, or, trade for one of their scheduled positions. If they choose to propose a trade, they will be shown a list of their scheduled positions in which the volunteer requesting the sub is qualified to serve. They can select multiple dates, and then click the "Propose Trade" button.

The trade proposal doesn't generate a Web Form until the volunteer originally requesting the sub accepts the trade by clicking on the accept trade link next to the proposed trade times. At this point, a Web Form will show up in VSP that will look just like a normal "swap accept" but it will say "w/trade" and include the positions the volunteer would like to trade.

If a volunteer does not wish to accept the trade, they simply do not click the accept trade link in the email, and no further action is necessary.